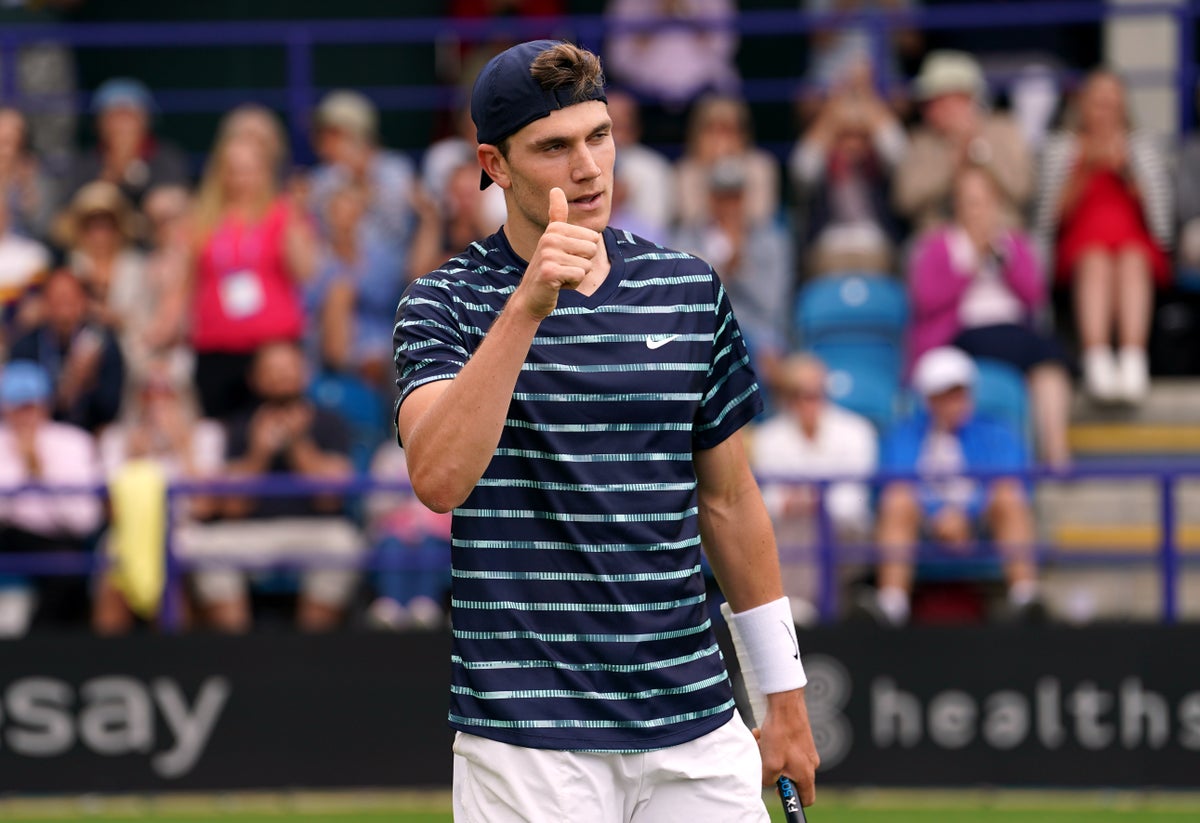 Jack Draper claimed his fiery temperament is similar to Andy Murray’s after battling past fellow Briton Ryan Peniston to reach the semi-finals of Eastbourne.

The 20-year-old became the last British player standing at the Rothesay International courtesy of a gutsy 6-3 6-3 success over his countryman.

His powerful performance at Devonshire Park was underpinned by aggression and fight.

Yet he repeatedly expressed agitation and chastised himself following mistakes, drawing comparisons with the demonstrative on-court behaviour of three-time grand slam-winner Murray.

“It’s tough; I’ve never been someone who’s incredibly calm and composed and like ice on a tennis court,” said Draper, who will face France-born American Maxime Cressy in the last four.

“That’s the unique thing about tennis: everyone has a different mentality. Mine’s a bit more fiery and therefore it’s tough to be calm the whole time.

“If I was calm the whole time, I probably wouldn’t get the best out of myself because that’s just not who I am.

“Andy’s got a similar personality, I guess.

“He’s someone who loves competing, wants to win the whole time, and sometimes that brings out a little bit of anger here and there.

“If he was someone who never got pumped up or emotional then maybe he wouldn’t have had the success and career he has had, it’s definitely a balancing act.”

In a first tour-level meeting between the left-handed wildcards, tournament debutant Draper dropped the opening two games but claimed six of the next seven to clinch the opening set.

The second set followed a similar pattern, with the world number 108 overturning a 3-1 deficit by winning five games on the bounce to progress to the first ATP Tour semi-final of his fledgling career.

Draper is due at Wimbledon next week and, while he is fully focused on the current competition, insists he fears no one.

“I’ve obviously gained a lot of confidence this week which I can take into future tournaments,” said Draper, who took the opening set off Novak Djokovic in his first-round defeat at SW19 last year.

“Everyone in the Wimbledon draw is obviously an amazing player and whoever I play will be very tough.

“There’s no doubt I can go far but, at the same time, there are a lot of things that need to fall into place for that to happen.

“I definitely believe in my ability and my game to beat the best players in the world, especially on grass because it’s a bit of a leveller, I’d say.

“I will go into Wimbledon and whoever I play, I will be confident.”

The all-British clash guaranteed some much-needed cheer for the home crowd after Cameron Norrie and Harriet Dart each suffered quarter-final exits earlier on Thursday.

British men’s number one Norrie was denied a maiden Eastbourne semi-final  by a 7-5 7-5 defeat to world number 60 Cressy, while Dart was outclassed by two-time Wimbledon champion Petra Kvitova, losing 6-3 6-4.

Having also knocked out Dan Evans, Cressy will be seeking a third successive British scalp on Friday, with Draper braced for a tough assignment.

“It’s going to be really testing because he’s obviously playing great this week but I look forward to the challenge,” he said.

Following a strong grass-court season so far, Peniston is now looking forward to realising the dream of playing at Wimbledon.

The 26-year-old has his fingers crossed for a meeting with 22-time grand slam winner Rafael Nadal at the London championships.”He’s been one of my idols since I was a young kid so to play him on Centre Court would be outrageous,” he said of the Spaniard.

Norrie will be seeded ninth at Wimbledon.

While the 26-year-old was disappointed with a result which denied him a meeting with Draper, he insisted preparation for the forthcoming home slam had been more than satisfactory.

“It was perfect, exactly what I needed, and going back to London right now, and I just get ready for Wimby obviously,” said Norrie.

In the women’s competition, an elbow injury for Ukrainian Lesia Tsurenko led to Brazilian Beatriz Haddad Maia going through to face Kvitova.

Reigning champion Jeļena Ostapenko will play Camila Giorgi in the other half of the draw. The Latvian overcame Anhelina Kalinina 6-3 6-2, while Italian Giorgi defeated Viktoriya Tomova 6-2 6-1.