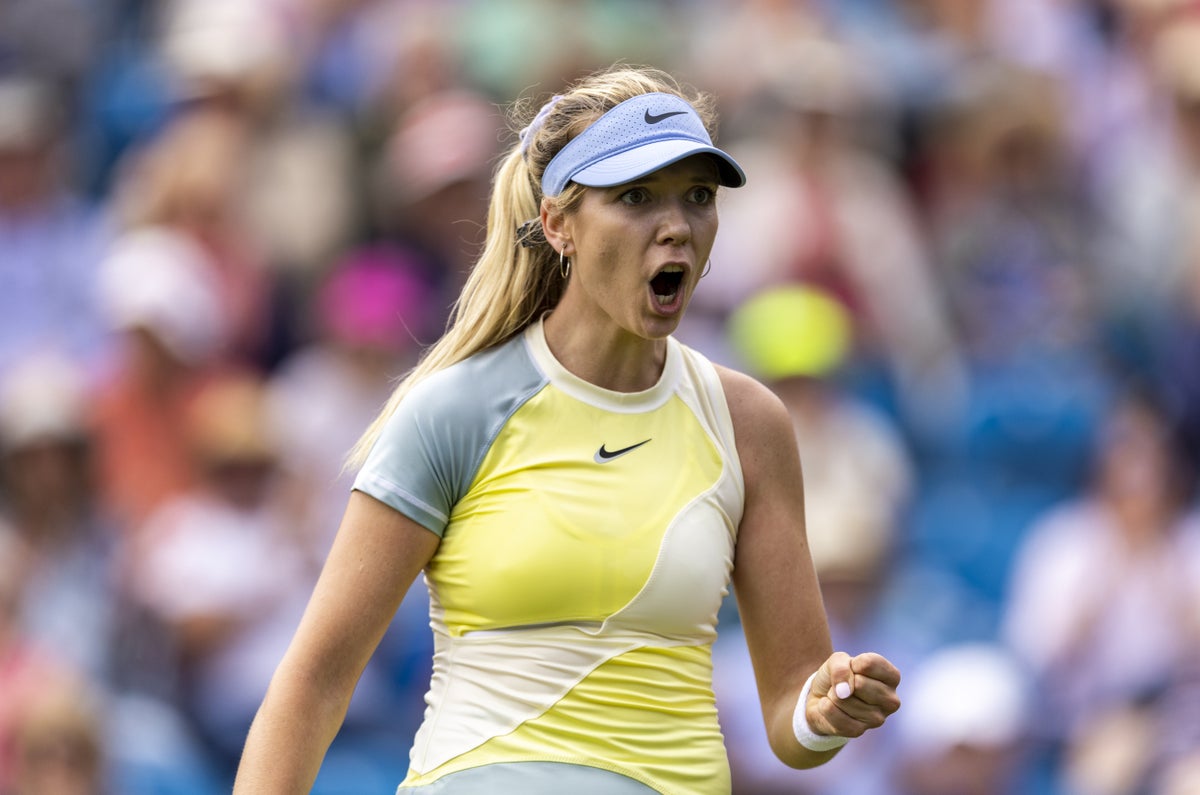 Katie Boulter and Jodie Burrage secured career-best victories on a memorable day for the British contingent at the Rothesay International Eastbourne.

Boulter kicked off proceeding with a dramatic 1-6 6-4 6-4 success over last year’s Wimbledon runner-up Karolina Pliskova to progress into the third round at Devonshire Park.

It was followed up later in the day by Burrage stunning world number four and top seed Paula Badosa for the best result of her fledging career.

Eventually the 25-year-old got on the board and slowly started to take those chances, with the former world number one struggling on serve.

Boulter would create 19 break points across two hours of tennis and while the helping hand of four consecutive double-faults by Pliskova aided her cause, she was well worth her victory.

“That gave me goosebumps so thank you so much,” the British number four said on-court after she backed up last week’s initial career-best victory over Alison Riske in Birmingham.

“I am super proud of myself. I went out, didn’t feel great and worked so hard to get out there. I battled, fought and to beat a player like that means so much.”

Burrage was able to follow in the footsteps of Boulter by reaching the last-16.

The 23-year-old’s match took place on Court One while Serena Williams’ eagerly-anticipated comeback occurred next door, but the home favourite did not lack support.

Roared on with the sun setting, Burrage kept chipping away at the serve of the Spaniard and sealed a 6-4 6-3 triumph in one hour and 13 minutes.

She admitted: “I’m not sure I have the words to describe how I feel right now.

“I’m over the moon with that win, how I played and handled myself on court. This might take a while to sink in. The last few weeks have been amazing. I had loads of opportunities thanks to the LTA to play these events and I’m loving every minute of it.”

In the men’s draw, Ryan Peniston and Dan Evans made it two more wins for the British hopefuls.

New world number 147 Peniston showed his patient in a tight second to edge a tie-breaker and then watched his talented teenage opponent lose his head.

Rune smashed a tennis ball out of the court and whacked his racket against a towel bin after being broken for a first time in the decider. More breaks would follow to give the Essex left-hander another major scalp following last week’s victory over Casper Ruud at Queen’s Club.

Peniston added: “It has been madness to be honest. A couple of weeks ago things were a lot different but now things have changed and I am loving it.”

Later in the day Dan Evans joined his compatriots in making it a hat-trick of home wins on Centre Court after he saw off Adrian Mannarino 6-4 6-3.

The Nottingham winner had to bide his time but broke at the end of the opener before another break in the eighth game of the second saw the British number two into the last-16.

Harriet Dart’s second-round tie with 10th seed Jil Teichmann was suspended at one set all.

It meant at least one more seeded player remained in the WTA 500 event after Maria Sakkari, Elena Rybakina and Elise Mertens were dumped out on Tuesday.

Defending champion Jelena Ostapenko stayed on course to retain her title with a straight sets win over Ajla Tomljanovic and Beatriz Haddad Maia, fresh from winning tournaments in Birmingham and Nottingham, saw off Kaia Kanepi in a decider.

Madison Keys, Camila Giorgi and Petra Kvitova were the other notable seeds to make the third round.